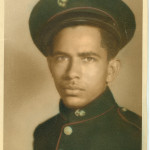 Mr. Randle is survived by two sisters, several nieces and nephews, other family members and friends.  His service to his country will be noted by a U.S. Marine Honor Guard.